This is the second part in the series about my hands-on experience with EMC VNXe 3300. In the first part I described the initial setup of VNXe and also the challenges that I had during the setup. Before ESXi servers and virtual machines can access the storage there is still a couple of things that need to be done. In this post I will go through setting up network port aggregation, iSCSI server, NFS server and also how to connect ESXi hosts to VNXe.

NIC aggregation can be configured from Settings – More configurations – Advanced Configuration. Default MTU size is 1500 so if jumbo frames are enabled it needs to be changed to 9000. This needs to be done only for the first port, because the other ports are aggregated to this port.

Port aggregation is enabled by selecting “Aggregate with eth2” under the eth3 and hitting “Apply Changes”. After these settings are also done to eth4 and eth5 the aggregation is ready.

These settings need to be done only once and Unisphere will automatically configure both SPs using the same settings. This also means that SPs can’t have different aggregation settings.

NFS server can be configured from Settings – Shared Folder Server Settings.
This is very similar to configuring an iSCSI server: there is only one additional step. 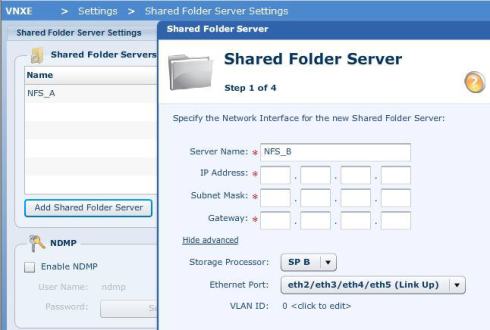 On “Shared Folder Types” page NFS and/or CIFS is selected. I was planning to do some testing only with NFS so I chose that. 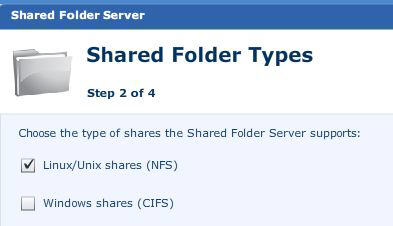 This VNXe will be connected to an existing vCenter/ESXi environment, so all the iSCSI settings are already in place on the hosts. VNXe will automatically discover all the ESX/ESXi hosts from vCenter. Only vCenter name or ip address and the appropriate credentials are needed. This makes things a lot easier. No need to manually register tens or hundreds of hosts. VMware hosts can be added to VNXe from Hosts – VMware.

When the discovery is done all ESX hosts will be shown under Virtualization Hosts. Also the total number of datastores are shown even if those datastores are not from the particular VNXe.

Hosts can be expanded in the view and all virtual machines on that ESX host will be shown. Also some interesting details are shown: OS type, state and associated datastore. Associated datastore is the name of the datastore as it is shown on ESX server. VNXe is pulling all this data from vCenter using the credentials provided earlier.

Even more details of an individual virtual machine can be viewed by selecting the VM and clicking Details.

Unisphere is really made to be easy and simple to use. Everything can be easily found from the menus and sub menus. Icons are big but are not just icons, there is also a subject line and an explanation. If this “Shared Folder Server Settings” would be the only info given then the real meaning of it might not be clear to everyone. But with the explanation it is very understandable:

I have small criticism about the first page of iSCSI and NFS server settings. I’m wondering why the advanced settings are hidden under the “Show advanced” link. The window is already big enough to have those settings shown in default. Ok, the page looks cleaner without the settings shown but it would really be more user friendly if they were not hidden. First time that I went through the settings I noticed the VLAN setting appeared on the summary page but I couldn’t remember seeing where to actually set it. So I went back to the first page and discovered the “Show advanced” link.

In the next part I will go through the software update procedure and look in to the issues that have been fixed.

One response to “Hands-on with VNXe 3300 Part 2: iSCSI and NFS servers”